A geriatric, male intact pug was taken in by a rescue organization. He presented to the veterinarian for evaluation of a dry, hacking cough. Interestingly, on physical examination, his neck was observed to expand when he coughed, like a bullfrog. 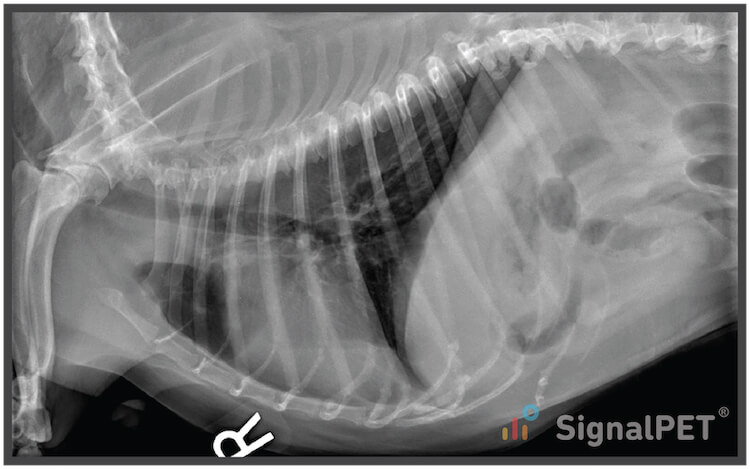 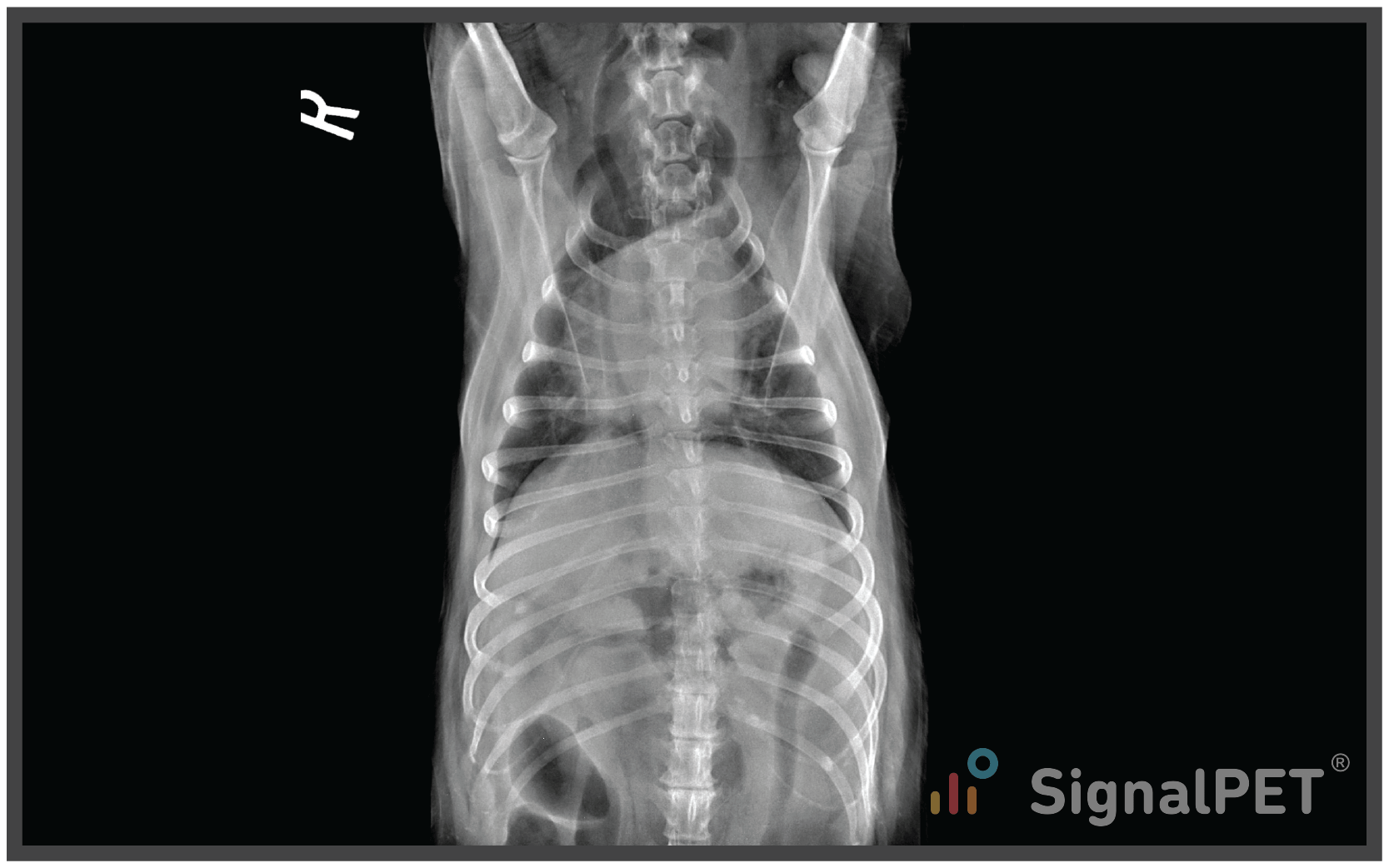 What’s Abnormal about this Case?

The study provided was a three view thoracic examination; however, we’ll focus on the right lateral and VD, since the left lateral was similar to the right.

In going through a systematic evaluation of the right lateral projection, the lungs are mildly under expanded with normal parenchymal opacity. The cranial border of the lungs (cyan) extends normally to the level of the first rib and the thoracic inlet (pink arrow) is normal. The cardiovascular structures are normal, as is the pleural space. The mediastinum is normal including the trachea (red). The body wall has spondylosis and shoulder osteoarthritis, but no substantial abnormalities. 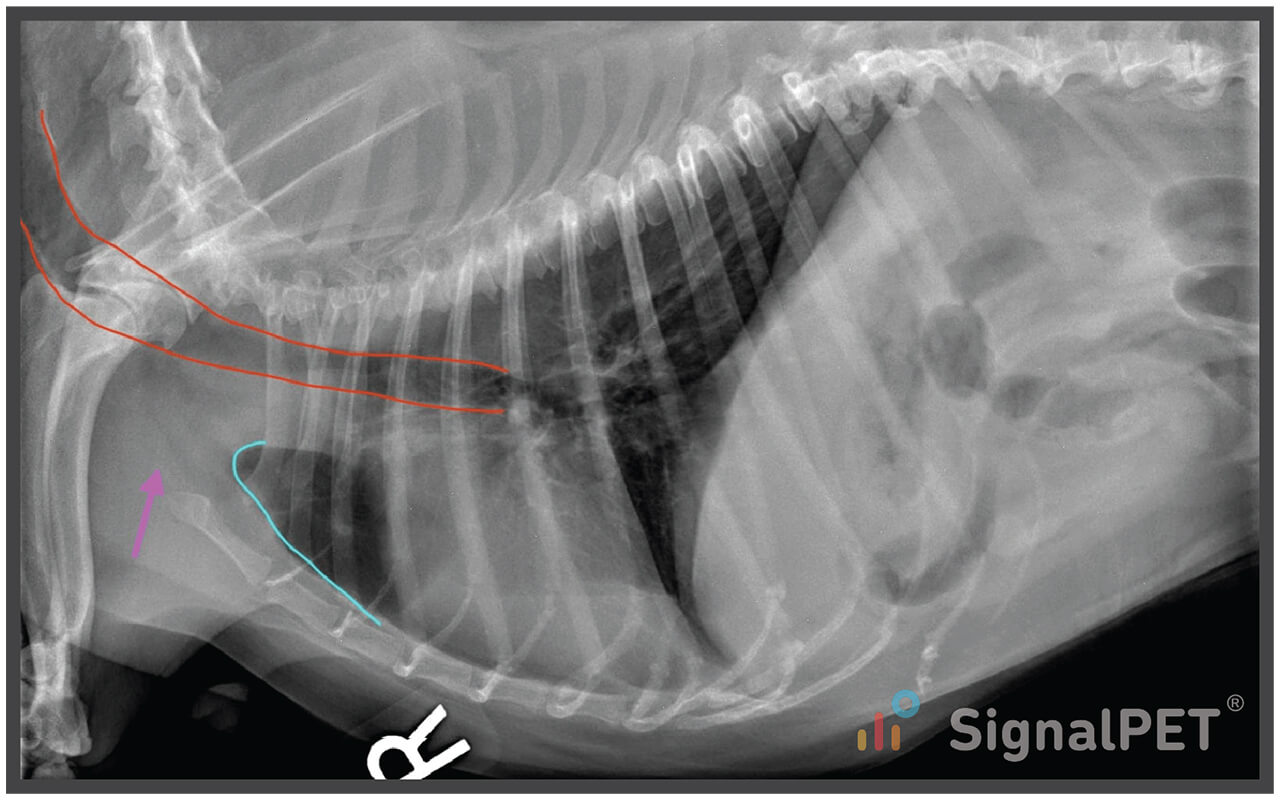 But things get interesting on the VD! The right cranial lung lobe scooches through the thoracic inlet into the cervical region (cyan). This is diagnostic for Cervical Lung Lobe Herniation.

There is also a mild rightward mediastinal shift because of the loss of the right cranial lung lobe volume. The trachea narrows and deviates to the right (red), while the primary bronchi are difficult to follow and likely collapsed. 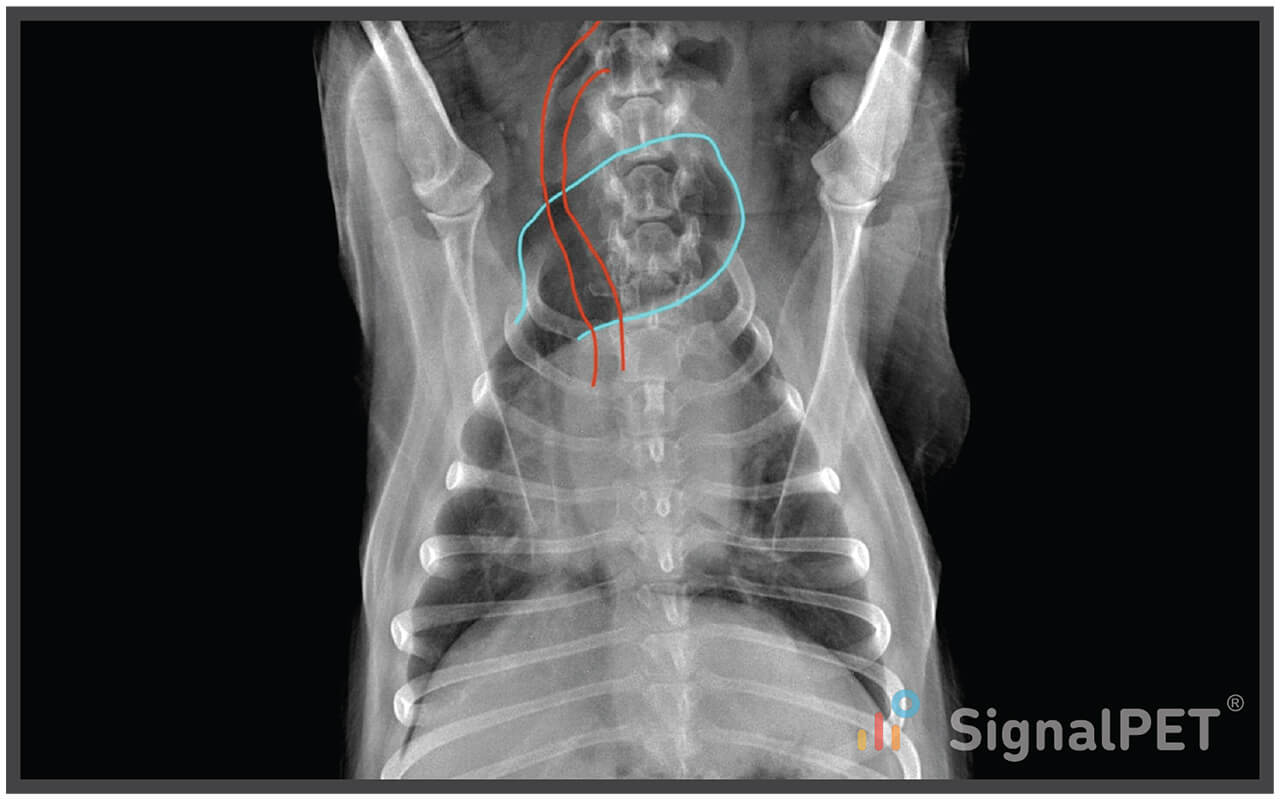 The Cervical lung lobe herniation is the cause of the bullfrog like appearance of the patient’s neck while coughing. Up till 2013, there were only three reported cases of this condition in dogs in the veterinary literature.

However, in 2013, a study by Nafe et al. in the Canadian Veterinary Journal, described the condition in a large group of dogs (121) undergoing fluoroscopy examination for coughing. In that population, 70% of the dogs displayed cervical lung lobe herniation, which was much higher than anticipated. Naturally, this finding would be easier to observe during fluoroscopy than static radiographic examination, which might explain part of the discrepancy. The majority of the dogs with this finding had kinking of the cervical trachea and collapse of the intrathoracic trachea and bronchi; however, the finding was not correlated with the duration of cough.

Next time you examine a coughing small dog remember to palpate the thoracic inlet for variable, bullfrog like distention. And when you take your thoracic radiographs, include the cervical region to evaluate for cervical lung lobe herniation.