SignalPET Radiology Case of the Week | Nodular or Miliary Pattern 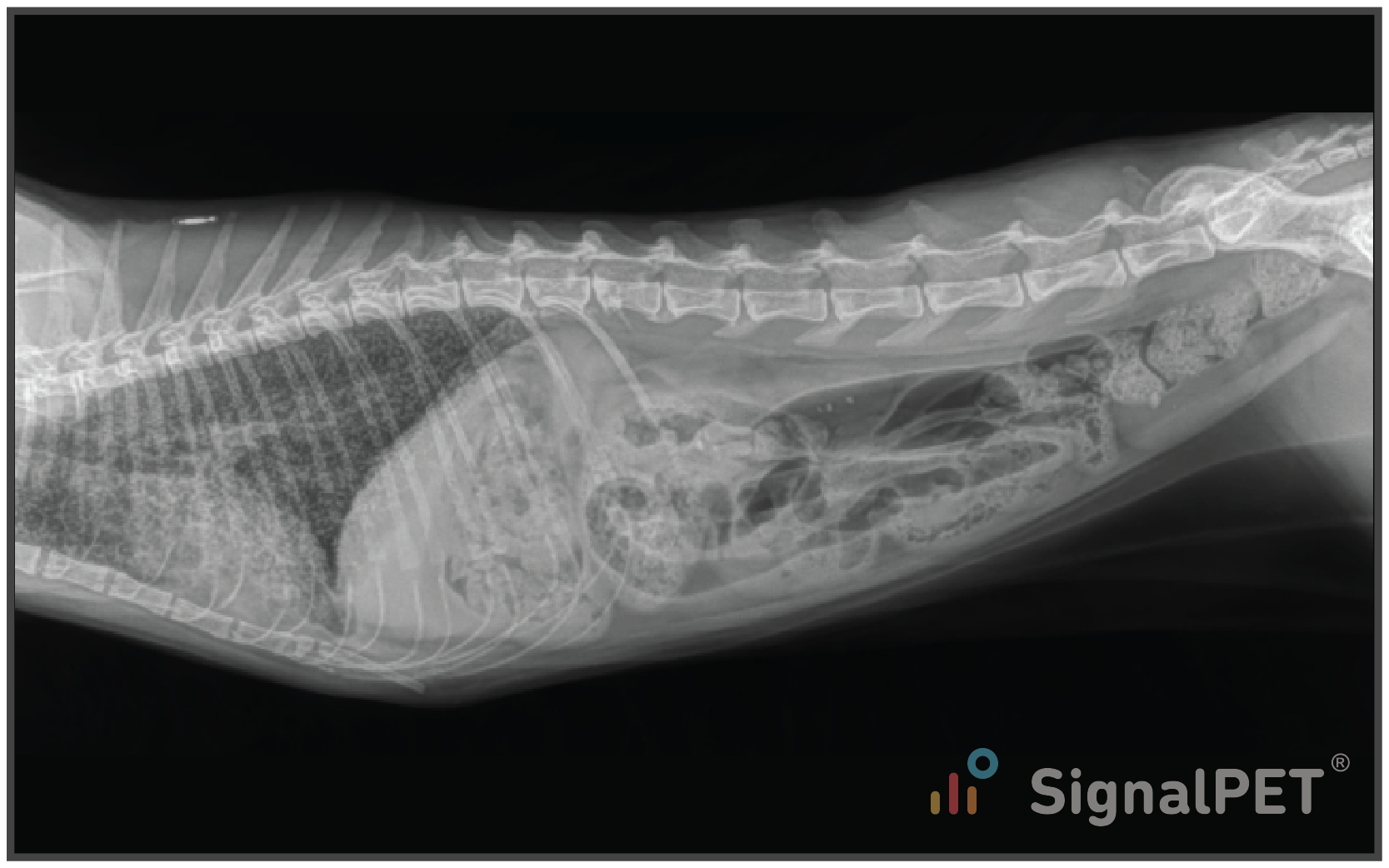 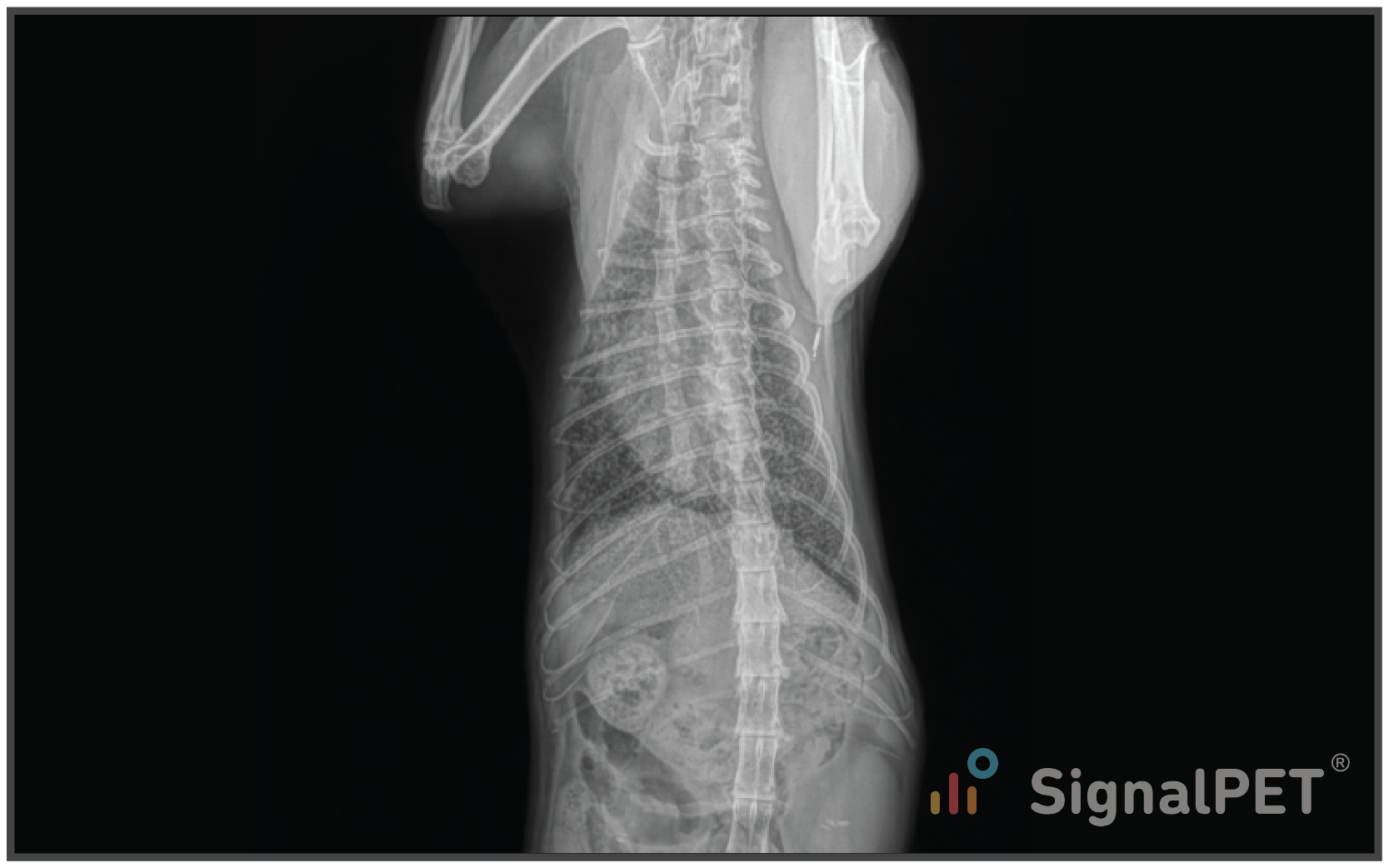 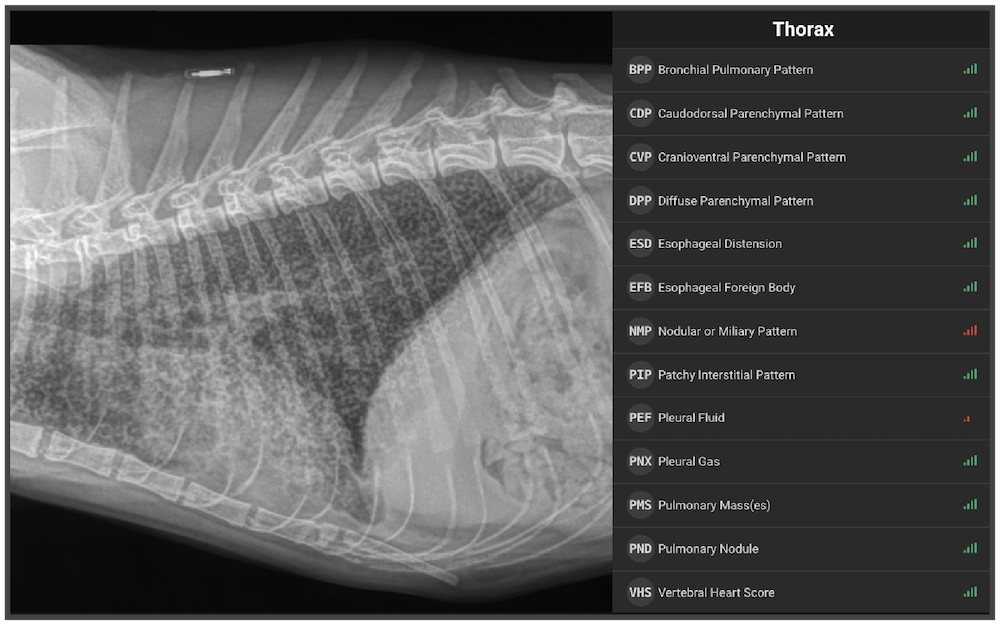 Clearly, the lungs are abnormal and too white. But how to describe the pattern?

There are many different terms that might be used, but if we look to the SignalRAY report, we see that this was described as Nodular or Miliary Pattern. What does that mean? If we zoom in and focus on the lateral radiograph first, the abnormal pulmonary opacity (whiteness) is diffuse and we can still make out the margins of the cardiac silhouette (orange) and large pulmonary vessels, so that rules out an alveolar pattern.

So, the pattern is interstitial, but is it structured? Yes, there are innumerable, tiny nodules that create small donuts (cyan), which represent the secondary pulmonary lobule structure. This is referred to as a miliary pattern because it resembles the sprinkling of tiny millet seeds across the lung fields. Based on CT and histopathology, we know this is created by a few different patterns of micronodular distribution, particularly around the small airways (bronchioles) and associated lymphatics.

The main differential diagnosis for this pattern are fungal infection (blastomycosis, histoplasmosis, cryptococcosis) and metastatic neoplasia (carcinomas, hemangiosarcoma, lymphoma). Tuberculosis is the main cause of this pattern in humans; however, this is a rare diagnosis in small animals. 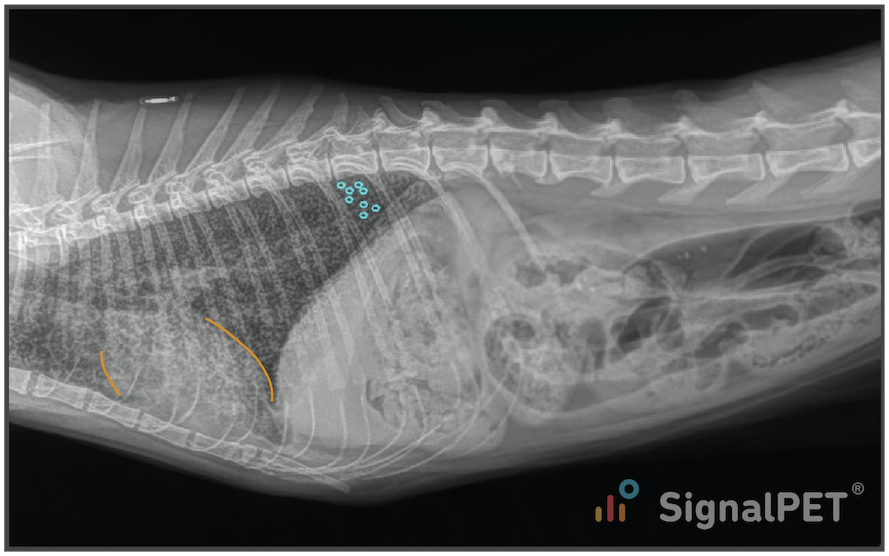 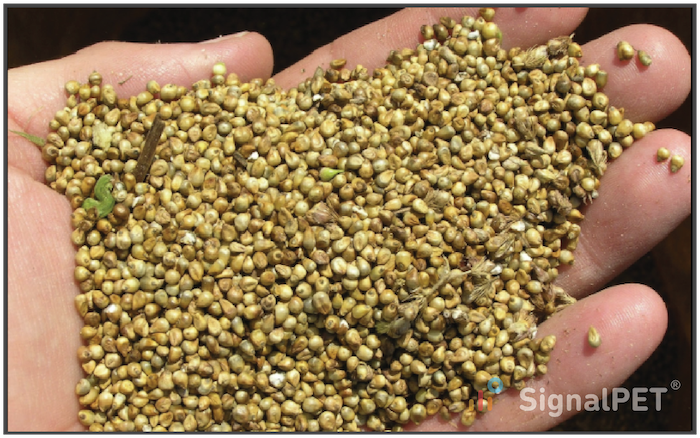 SignalRAY also indicated possible pleural effusion, which is seen on the VD radiograph (red) characterized by soft tissue opacity along the body wall that causes lung retraction and a thin pleural fissure. Pleural effusion has a half red bar because AI was not as confident about the finding; however, I agree with the interpretation, although the volume is small. 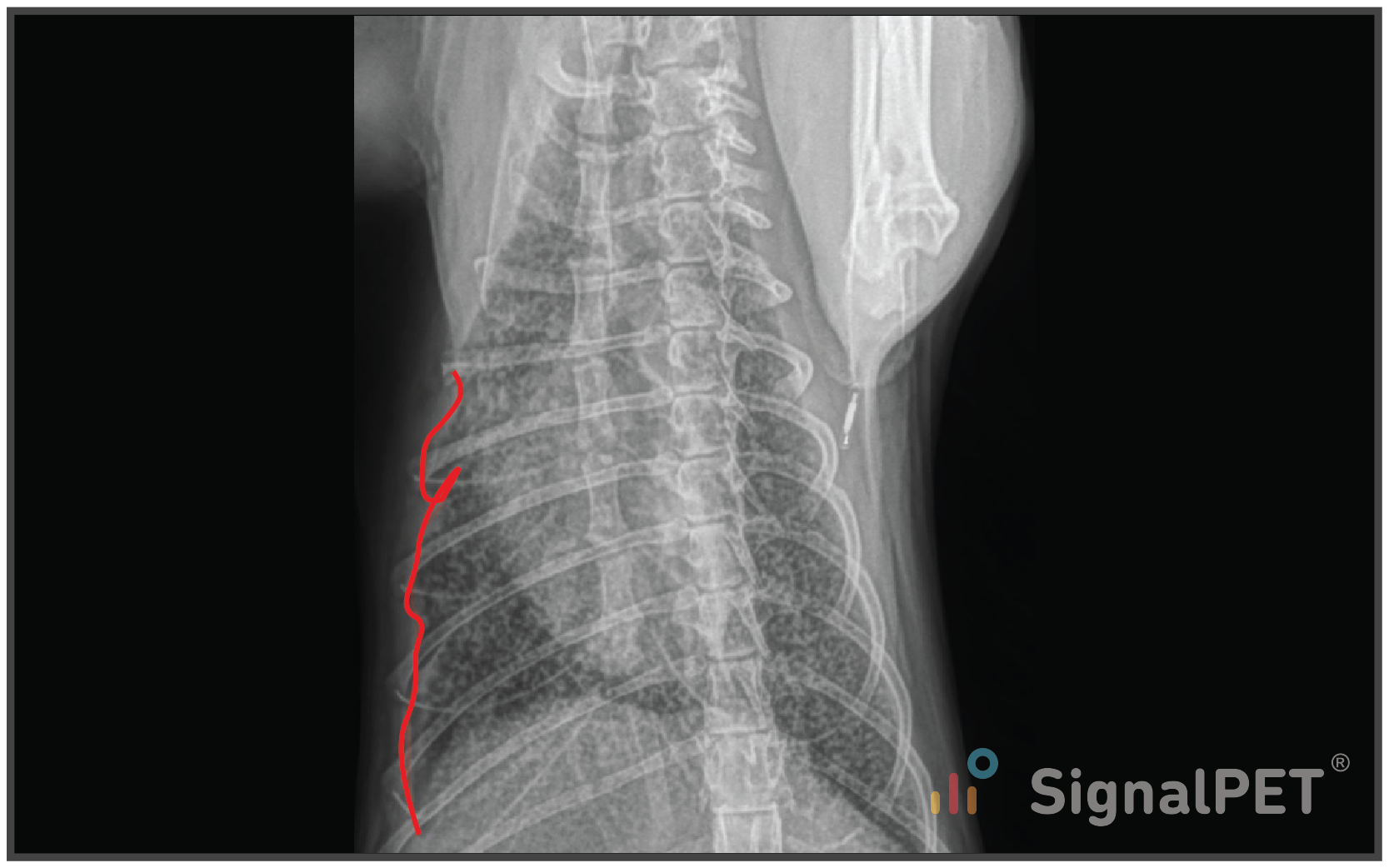 In complete evaluation of the radiographs, SignalRAY noted some findings unrelated to the miliary pulmonary pattern (renal mineralization, cystic calculi, gastric distention); however, no findings that we might expect with fungal disease or metastatic neoplasia (aggressive bone lesions, mid-abdominal mass, splenomegaly, hepatomegaly, peritoneal fluid) were detected. The patient does have poor body condition.

While this case is a beautiful and extreme example of a miliary pattern, often you will see cases like the one below, which have a bit of a bronchial pattern thrown in, or maybe even masses or patchy alveolar pattern.

Just remember if you have a military pattern, to elevate fungal infection and metastatic neoplasia to the top of your list. 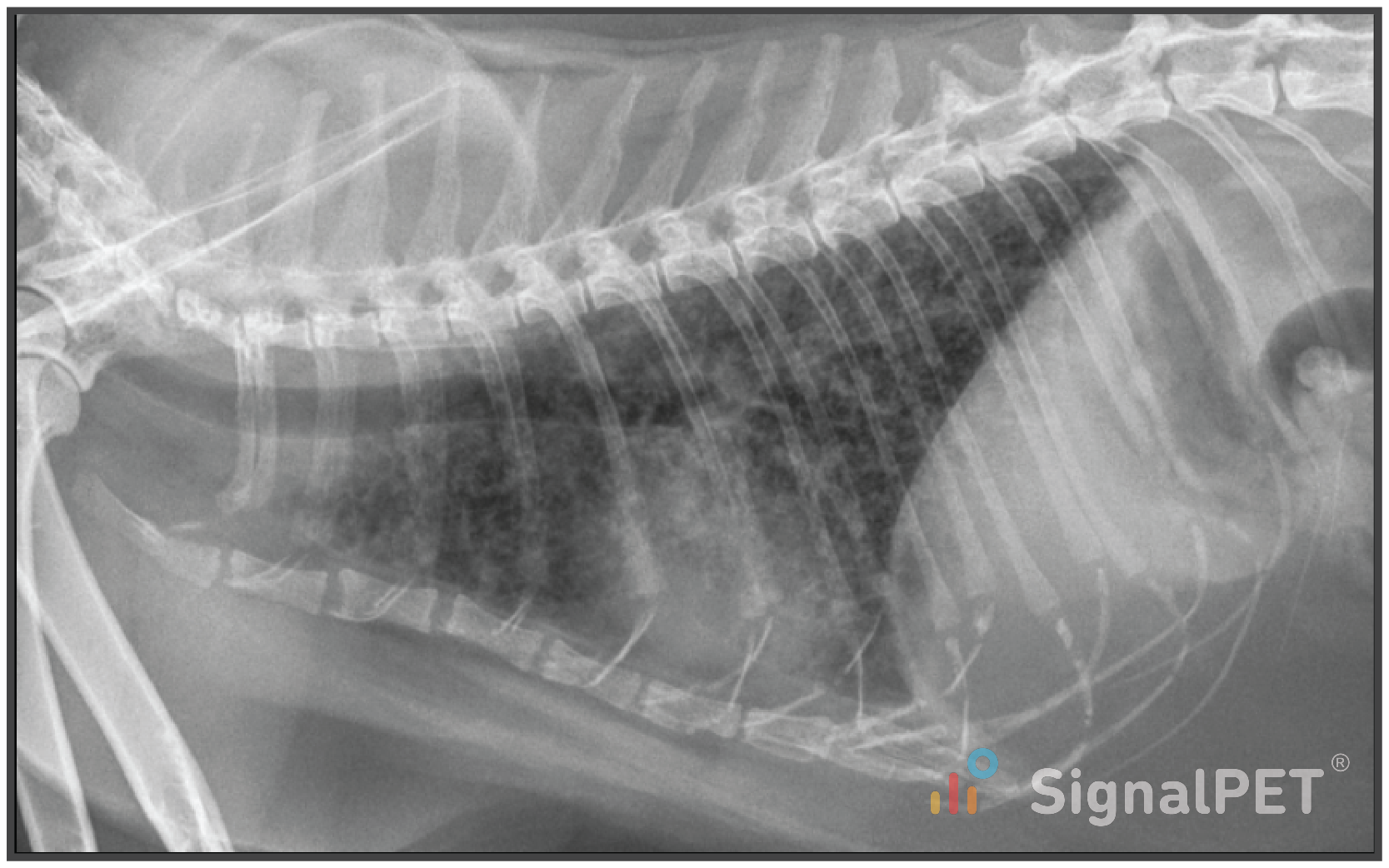